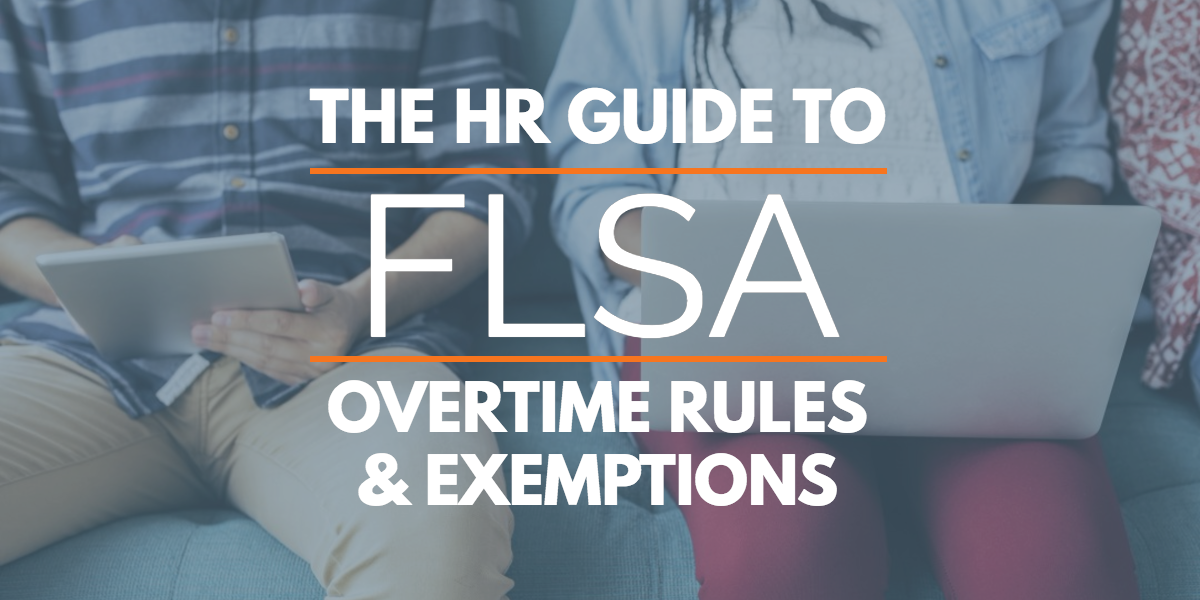 What is FLSA status?

The Fair Labor Standards Act (FLSA) was first enacted in 1938. It set what we’ve come to know as the 40-hour workweek and the first minimum wage and overtime pay standards for workers in the U.S. As such, the FLSA covers certain employees entitled to labor law standards like overtime pay and minimum wage. Your FLSA status determines whether or not you are covered by the FLSA. Employees with FLSA coverage have FLSA non-exempt status. Employees without FLSA coverage have FLSA exempt status.

How do you know when an employee's FLSA status is exempt or non-exempt? Employers pay exempt employees for the job duties they perform, not the hours it takes them to do the work. Therefore, exempt employees are not eligible for FLSA coverage and are not entitled to certain labor standards like overtime pay and minimum wage.

How do you determine FLSA status?

First, you should determine whether the worker is an employee or independent contractor. If you define your workers incorrectly, you could be liable for unpaid taxes and fines.

The IRS provides three Common Law Rules for determining worker status. Is the worker an independent contractor or employee? Ask these questions:

If the answer is ‘yes’ to these questions, your worker is probably an employee, not an independent contractor. Though, the IRS says there is no magic formula that determines status. The most important thing to look at when identifying a worker is the entire relationship between the worker and employer. Then, document all information about this relationship.

Once you have determined that your employees, you must now identify their FLSA status: exempt or nonexempt.

To classify employee FLSA status, you must answer the following questions:

An employee passes the FLSA exemption test if:

The DOL’s exempt duties typically include these roles:

Is the employee paid on a salary basis?

Does the employee earn above the salary threshold?

If an employee earns a salary above the FLSA threshold of $23,600 per year ($455 per week), the employee is exempt from overtime pay and other FLSA coverage.

The Department of Labor determines exempt duties based on the primary duty and other duties the employee does his or her job. This is not determined by the employee's job title or description but by the actual work performed. White collar exempt duties typically fall under roles such as executives, administrators, and other professional positions requiring certain degree levels or high-level work.

“Primary duty” as stated by the Department of Labor means the principal, main, major, or most important duty the employee performs. Determination of an employee’s primary duty must be based on all the facts in a particular case, with the major emphasis on the character of the employee’s job as a whole.

Note: The DOL states that advanced knowledge cannot be attained at the high school level.

Some examples include lawyers, doctors, teachers, accountants, and clergy.

What is Back Pay?

Back pay is a retrospective payment relating to a prior pay period. This typically happens due to salary increase or incorrect rate of pay in the cases of minimum wage and overtime pay.

Here is a guide from the Department of Labor on FLSA methods employees may take to recover unpaid minimum wage or overtime pay:

(1) The Wage and Hour Division may supervise payment of back wages.

(2) The Secretary of Labor may bring suit for back wages and an equal amount as liquidated damages.

(3) An employee may file a private suit for back pay and an equal amount as liquidated damages, plus attorney's fees and court costs.

(4) The Secretary of Labor may obtain an injunction to restrain any person from violating the FLSA, including the unlawful withholding of proper minimum wage and overtime pay.

If an employee has received any back pay wages under the Wage and Hour Division or the Secretary of Labor has filed suit to recover lost wages, the employee may not bring suit under the FLSA.

What is considered work?

The FLSA sets a threshold of hours to be worked in a single seven-day workweek at 40 hours. Any time worked over the threshold is considered overtime. Some jobs like, medical or government, may have different thresholds.

When should overtime be paid?

Unless an employee is exempt from FLSA coverage, an employee must receive overtime pay at the rate of time and one-half the regular rate of pay for any amount of time worked over 40 hours in a single workweek. Overtime pay is due in the corresponding pay period for which the overtime work was performed.

Yes! Any work performed off-the-clock is illegal. Workers should be paid for any hours worked, whether or not that work is counted on a timesheet. Even work that is not specifically requested but allowed must be compensated. Some of the most common types of the off-the-clock work include:

Under the FLSA Statute of Limitations, how long does an employee have to file a claim for unpaid overtime wages?

Do you know how long your employees have to file a lawsuit for unpaid overtime wages under the FLSA statute of limitations?

The basic answer is two years-to-date after the wage violation, unless the employer willfully violated the FLSA, in which case the employee has three years to file.

If the employee experienced ongoing wage violations (not just one time), he or she will only be able to recover unpaid wages (called back pay) for the two years prior to filing the claim.

What is the difference between a wage claim and a lawsuit?

Employees may file a wage claim with the Wage and Hour Division of the DOL and, in some states, employees may be able to file with their state department of labor. A claim does not involve the court system, whereas a lawsuit does. If the claim cannot be resolved, the employee may file a lawsuit—if there is still time under the FLSA statute of limitations. A lawsuit may occur if the claim could not be resolved or if the claim was impractical, in which case an employer may take the suit to court.

Note that some states have different requirements for filing wage claims. In Delaware, for example, employees must file wage claims at least 90 days before the FLSA statute of limitations ends. In New Jersey, employees may claim wages worth $30,000 or less.

FLSA changes to overtime rules have consequences for many businesses in the U.S. Human Resources needs to know all the ways employees may claim back pay for overtime or off-the-clock work and what they could be entitled to under the FLSA statute of limitations.

Prepare for the FLSA Changes to Overtime Rules with FLSA Resources

The rules are changing. Now, more than ever, employers need to prepare their businesses and Human Resources needs to define workers and classify employees the right way (using the FLSA exemption test) to avoid major penalties from the IRS and Department of Labor.

That's why we provide educational resources to help employers and HR managers keep their organizations compliant. By offering assistance with compliance management, we help you spend less time searching for a solution and more time focused on your employees and your bottom line.

Use these Fair Labor Standards Act resources to help keep your organization compliant:

"There are many scenarios (employee being paid two separate wages, calculating bonuses , etc) occurring with each pay period. I was able, with the help of the knowledgeable Fuse reps, to identify and address each scenario."

"We didn't have the best time-keeping records and Fuse has helped us make big improvements in our accuracy. We are able to process payroll without errors."