FLSA Computer Exemption: How to Determine if Employees Qualify

Affecting companies across the U.S., the Department of Labor’s changes to overtime rules have employers and HR managers taking a second look at employee FLSA status. The FLSA changes, effective beginning December 1, 2016, will raise the salary threshold for overtime pay from $23,600 per year ($455 per week) to $47,476 per year ($913 per week).

These changes could allow over 4 million workers in the U.S. to be considered FLSA non-exempt and thus eligible for overtime pay. Employees with FLSA exempt status, however, means their employers are not responsible for paying them for overtime work.

How do you determine FLSA status for employees?

Employees must pass all three of the tests below to be exempt from FLSA coverage:

The DOL’s exempt duties typically include these roles:

From what we read above, it seems that any computer professional or IT employee has FLSA exempt status under the computer exemption, right?

Many employers make this mistake. If you do, you could pay a fortune for unpaid wages and liquidated damages, not to mention all those attorney fees.

Don't assume any employee who works with computers is exempt from FLSA coverage. Review these special instructions and qualifications for the FLSA computer exemption for computer professionals.

Which Employees Qualify for the FLSA Computer Exemption?

According to Section 13(a)(1) and Section 13(a)(17) of the FLSA, computer systems analysts, computer programmers, software engineers, and other similarly skilled workers in the computer field are exempt from minimum wage and overtime pay provided they also meet the other tests for exemption like salary level. Keep in mind that a job title alone cannot determine FLSA status for any employee. The Department of Labor bases these exemptions on specific job duties and compensation.

To qualify for the FLSA computer exemption, the following tests must be met:

The FLSA computer exemption doesn't include computer professionals whose primary job functions involve manufacturing or repairing computer hardware and do NOT primarily engage in software engineering or systems analysis.

Unlike some other categories of exemptions, the FLSA computer exemption does not require computer professionals to hold certain degrees or certifications.

While these professionals most likely hold higher degrees to perform these duties, the level of education is irrelevant when determining FLSA exempt status. 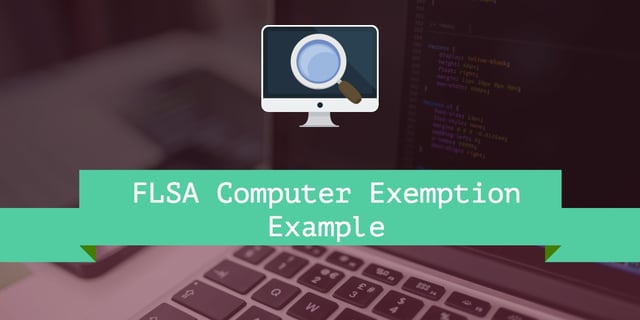 According to what you’ve learned above, is the following person entitled to overtime pay (FLSA nonexempt)? Or do they have FLSA exempt status?

Computer Cory is an employee at your company who earns an annual salary of $75,000. He installs, maintains, and troubleshoots the software for the company computers. These functions under his job duties are complex and require high-level skills.

Does Cory fall under the FLSA computer exemption or does he have non-exempt status?

Let’s look again at the tests to qualify for the FLSA computer exemption.

Your company pays Computer Cory an annual salary of $75,000. This amount is above the exempt threshold of $455 per week. (He will continue to make above the new threshold that takes effect December 1, 2016, of $913 per week). Thus, he passes the compensation test.

Is the worker employed as a computer systems analyst, computer programmer, software engineer, or other similarly skilled worker in the computer field?

Next, we look at Computer Cory’s actual work and job duties. He does not work as a systems analyst, programmer, or software engineer, he installs and troubleshoots hardware. The FLSA computer exemption does not include workers who deal with the repair of computer equipment or hardware.

An employee like Cory whose work depends on computers but job duties do not primarily include software engineering or systems analysis would typically not have FLSA exempt status. Cory does not pass this test.

Conclusion: Computer Cory is FLSA nonexempt (he is protected by FLSA coverage like overtime pay).

More examples of job duties that are not likely to qualify for the FLSA computer exemption:

Do not assume that because an employee works in IT he is automatically exempt from FLSA coverage. It’s important to check each employee based on the FLSA exemption tests. If needed, check additional job duties tests required by the employees’ roles as in the case of the computer professional.

Keep in mind that state laws may differ from the regulations of the federal FLSA. If that is the case, employers must comply with whatever protects the employee most. Additionally, other exemptions may also come into play regarding certain employees and should be considered before assigning FLSA status. This article is meant for educational purposes only and should not be considered legal counsel.

The FLSA can be difficult to understand and the computer exemption is arguably one of the FLSA exemptions employers struggle with most. Get the resources you need to successfully manage FLSA compliance (and don’t end up in court).