FLSA Learned Professional Exemption: How to Determine if Employees Qualify

In this article, we will discuss the learned professional exemption under the FLSA. But first, let’s review FLSA status, exempt and nonexempt.

Exempt or Non-Exempt? How do you determine FLSA status for employees?

An employee’s FLSA status is determined based on salary basis, salary level, and duties performed. In order to determine employee FLSA status, see if the employee passes the FLSA exemption test.

An employee must pass all three of the tests below to be exempt from FLSA coverage (not covered by the FLSA):

According to the Department of Labor, exempt duties typically include these roles/occupations:

What is a learned professional?

Before we can determine if an employee qualifies for a white-collar exemption that falls under the exempt job duties section of the exemption test, we must understand what the roles are.

A learned professional is an employee who is paid on a salary basis, earns above the FLSA exemption threshold weekly or annually, and performs primary job duties that include work requiring advanced knowledge in the field of science or learning that was acquired through a prolonged course of specialized intellectual instruction. This advanced knowledge cannot be attained at the high school level. Examples of learned professionals include doctors, lawyers, and accountants.

Which employees qualify for the FLSA learned professional exemption?

In addition to the standard exemption tests of salary basis and level, the FLSA states that learned professionals perform certain primary duties in their jobs that require a certain level of knowledge. It’s important to understand, as with any FLSA exemption, it is not the job title, but rather the actual duties performed by the employee that determine an employee’s eligibility for exemption.

In order to be considered a learned professional, the employee must perform work requiring advanced knowledge in the field of science or learning. That can seem pretty broad, so let’s break that down a little more.

According to the DOL, fields of science and learning include the following:

In addition to occupations in these fields, any other occupation that has a recognized professional status that can be distinguished from mechanical arts or skilled trades would be considered a learned professional. While knowledge in mechanical arts or skilled trades could be advanced, they are not considered to be in a field of science or learning. 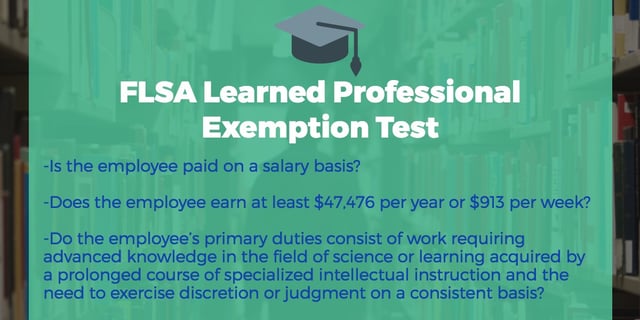 In order to determine if an employee is considered a learned professional, see if the employee passes the exemption test:

If you answer yes to all of the questions (the employee “passes the tests”), the employee most likely qualifies for the FLSA Learned Professional Exemption. 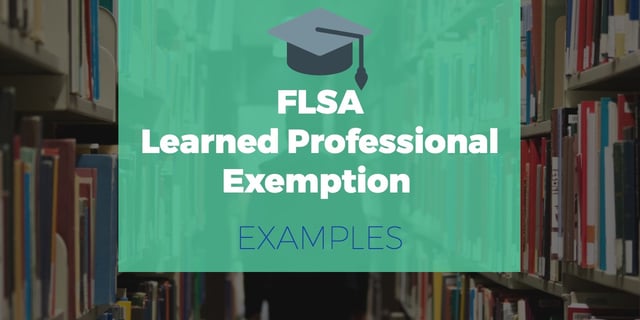 Some examples of occupations that could be considered learned professionals include lawyers, doctors, teachers, accountants, and clergy. However, there are some occupations and roles that may prove to be more difficult to distinguish than others.

Take nurses, for example. Let’s say you have an R.N. (Registered Nurse registered by the state examining board) who is paid $920 per week on a salary basis and an L.P.N. (Licensed Practical Nurse) who earns $20 per hour. Who is exempt (assuming new FLSA overtime rules effective December 1,2016)?

The R.N. is performing job duties that require advanced knowledge and discretion in the field of science. Because the nurse is an R.N., we can confirm the advanced knowledge used in the job was acquired by a prolonged course of specialized intellectual instruction. Lastly, the R.N. is paid on a salary basis above the exemption threshold. This R.N. has FLSA exempt status and is not covered by the FLSA for rights including overtime pay.

Now, let’s look at the L.P.N. Typically, these types of nurses require less education and knowledge to perform their duties than an R.N. The L.P.N. is also paid on an hourly basis below the exemption threshold. Therefore, we can assume this L.P.N. has FLSA nonexempt status and is covered by the FLSA with rights to overtime pay and minimum wage.

Let’s also compare radiologists with radiology technologists. While both work in the field of science and medicine and both have education beyond high school, there are some differences that are worth noting, and may help you in determining the FLSA exemptions of your employees.

Simply put, a radiology technologist (RT) would be the person who prepares the medical imaging (i.e., x-ray) room and machines, positions the patients for x-rays, and handles the imaging equipment and film for the x-rays. The radiologist, however, is a medical doctor (MD) responsible for reading and interpreting the x-rays for the patients and diagnosing and treating the disease or injury. Which, if either, would qualify for the learned professional exemption?

In response to an inquiry about employees, the DOL suggested that radiologists had exempt status under the learned professional exemption whereas the RTs did not. It’s pretty obvious why a radiologist would be exempt. RTs, however, seem a little bit trickier to understand.

RTs typically require a two-to-three-year radiology technology program followed by an exam for registration. Because the profession does not require a degree in the specific field, it’s the DOL’s opinion that the job does not meet the exemption requirement for advanced knowledge acquired by a prolonged course of specialized intellectual instruction.

Additionally, RTs do not perform the duties of a learned professional, like radiologists who must analyze and exercise discretion on a consistent basis. An RT’s job may require highly skilled work requiring significant training, but the overall character of the duties are routine mental, manual, mechanical, and physical processes.

Another occupation that may cause confusion is engineering. While it may seem like all engineers would be considered learned professionals, there are some engineering-related jobs that do not require advanced knowledge or a degree, but rather knowledge of a highly-skilled technician. In the past, courts have cited a lack of advanced education and training from an employee and deemed these job duties not requiring said education and training. Because the duties did not require advanced knowledge and training, the courts ruled the employee as a highly-skilled technician rather than a learned professional.

Similarly, an employee who has acquired knowledge from a prolonged course of specialized intellectual instruction (i.e., a college degree) does not automatically qualify for the learned professional exemption. The employee must use this acquired advanced knowledge to perform the main duties of his/her job.

As you can see, the FLSA learned professional exemption is not cut and dry and requires some thought before assigning exemptions to employees. HR should proceed with caution when classifying employees and not delay in doing so. Beginning December 1, 2016, the FLSA changes to overtime rules take effect and employers are responsible for paying employees properly under the FLSA.

Learn more about the new overtime rules and how to classify your employees in our free guide for employers and HR managers. Want to be confident in your FLSA compliance strategy? Talk with a specialist.