FLSA Statute of Limitations Overtime Rules: What to Know

The FLSA overtime rules are changing, and businesses will be without excuse if they’re not ready for the Final Rule taking effect December 1, 2016.

In May, President Obama announced the Department of Labor’s Final Rule for FLSA changes to overtime rules. These changes will increase the threshold for white-collar exemptions. Currently, workers who are paid a salary over $23, 600 annually ($455/week) are exempt from (not eligible for) FLSA coverage including overtime pay. Under the new rule, that salary threshold increases to $47, 476 per year ($913/week).

With possibly more than 4 million workers becoming eligible for overtime pay, companies should be sure they have classified their employees with the correct FLSA status (exempt or nonexempt). If not, employers could be facing major penalties, even lawsuits.

It’s important to know the ins and outs of the FLSA, understanding both the employer and employee side of things to best protect your organization and handle any situations that arise surrounding FLSA classification and coverage.

Overtime claims don’t occur only in the case of a demanding employer withholding overtime pay from his workers. These claims often occur when an employer has misclassified an employee and believes the employee to be exempt from overtime pay and other FLSA coverage.

There are a number of reasons an employee may file a claim for unpaid wages—don’t think it would never happen in your business.

Under the FLSA Statute of Limitations, how long does an employee have to file a claim for unpaid overtime wages?

With the impending changes to overtime rules, employers and HR managers should be familiar with the rules of FLSA procedures, specifically the FLSA statute of limitations. Do you know how long your employees have to file a lawsuit for unpaid overtime wages?

The basic answer is two years-to-date after the wage violation, unless the employer willfully violated the FLSA, in which case the employee has three years to file.

If the employee experienced ongoing wage violations (not just one time), he or she will only be able to recover unpaid wages (called back pay) for the two years prior to filing the claim. 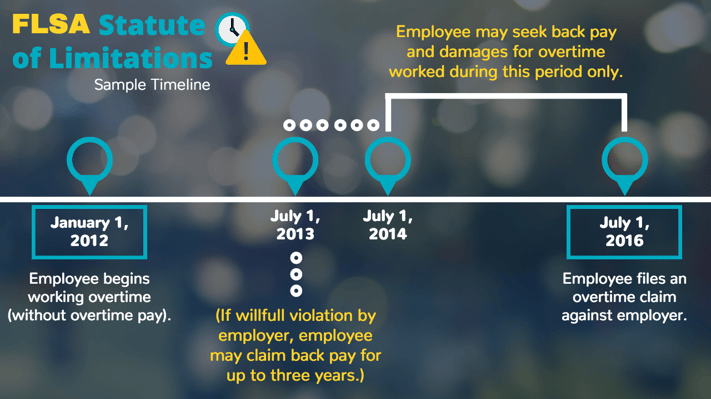 Some state laws differ from federal laws, most allowing employees additional time to file a claim. Know the labor laws for your state in addition to federal laws.

To better understand the ins and outs of the overtime rules and the FLSA statute of limitations, we need to know the answers to some frequently asked questions on this topic.

What is Back Pay?

Back pay is a retrospective payment relating to a prior pay period. This typically happens due to salary increase or incorrect rate of pay in the cases of minimum wage and overtime pay.

Here is a guide from the Department of Labor on FLSA methods employees may take to recover unpaid minimum wage or overtime pay:

(1) The Wage and Hour Division may supervise payment of back wages.

(2) The Secretary of Labor may bring suit for back wages and an equal amount as liquidated damages.

(3) An employee may file a private suit for back pay and an equal amount as liquidated damages, plus attorney's fees and court costs.

(4) The Secretary of Labor may obtain an injunction to restrain any person from violating the FLSA, including the unlawful withholding of proper minimum wage and overtime pay.

If an employee has received any back pay wages under the Wage and Hour Division or the Secretary of Labor has filed suit to recover lost wages, the employee may not bring suit under the FLSA.

What is considered work?

FLSA sets a threshold of hours to be worked in a single seven-day workweek at 40 hours. Any time worked over the threshold is considered overtime. Some jobs like, medical or government, may have different thresholds.

When should overtime be paid?

Unless an employee is exempt from FLSA coverage, an employee must receive overtime pay at the rate of time and one-half the regular rate of pay for any amount of time worked over 40 hours in a single workweek. Overtime pay is due in the corresponding pay period for which the overtime work was performed.

Is it Illegal to Work ‘Off-the-Clock”?

Yes! Any work performed off-the-clock is illegal. Workers should be paid for any hours worked, whether or not that work is counted on a timesheet. Even work that is not specifically requested but allowed must be compensated. Some of the most common types of the off-the-clock work include:

What is the difference between a Wage Claim and a Lawsuit?

Employees may file a wage claim with the Wage and Hour Division of the DOL and, in some states, employees may be able to file with their state department of labor. A claim does not involve the court system, whereas a lawsuit does. If the claim cannot be resolved, the employee may file a lawsuit—if there is still time under the FLSA statute of limitations. A lawsuit may occur if the claim could not be resolved or if the claim was impractical, in which case an employer may take the suit to court.

Note that some states have different requirements for filing wage claims. In Delaware, for example, employees must file wage claims at least 90 days before the FLSA statute of limitations ends. In New Jersey, employees may claim wages worth $30,000 or less.

FLSA changes to overtime rules have consequences for many businesses in the U.S. Human Resources needs to know all the ways employees may claim back pay for overtime or off-the-clock work and what they could be entitled to under the FLSA statute of limitations.

More than ever, companies need to classify employees and manage their time and attendance properly. This will help you treat your employees fairly and avoid major penalties under the FLSA, even a lawsuit.