How to Classify FLSA Non-Exempt and Exempt Employees & Contractors 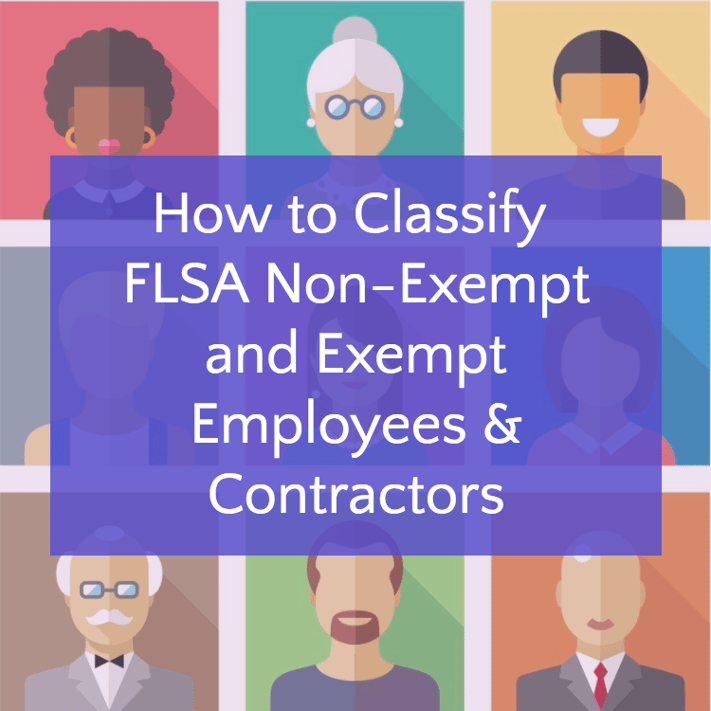 FLSA Non-Exempt. Or is it FLSA Exempt? Exempt from what exactly? Between the FLSA changes to overtime rules and the increases in civil monetary penalties, employers can't ignore employee classifications.

The new overtime rule could make more than 4 million workers in the US eligible for overtime pay. If you haven’t classified your employees with the correct FLSA status, you could land some big penalties, an overtime wage claim, or worse—a lawsuit. Prepare your organization by classifying your employees correctly. Are they employees or independent contractors? FLSA non-exempt or exempt?

First, HR managers need to know the difference between employees and independent contractors.

Why should you know the difference between an employee and an independent contractor? The main reason comes down to taxes and withholdings. An employer will withhold income taxes, withhold and pay Social Security and Medicare taxes, and pay unemployment tax on employee wages for employees. Generally, an employer will not withhold or pay taxes on payments to independent contractors.

If you define your workers incorrectly, you could be liable for unpaid taxes and fines.

The IRS provides three Common Law Rules for determining worker status. Is the worker an independent contractor or employee? Ask these questions:

If the answer is ‘yes’ to these questions, your worker is probably an employee, not an independent contractor. Though, the IRS says there is no magic formula that determines status. The most important thing to look at when identifying a worker is the entire relationship between the worker and employer. Then, document all information about this relationship.

When FLSA interpretation become cloudy, courts may rely on the economic realities test to determine worker status. This test looks at the dependence a worker has on the business for which he or she works and the nature of the business relationship.

Here’s a brief overview of the test and the factors to consider when determining a relationship under the FLSA:

Now that you’ve determined whether a worker is an employee or an independent contractor, you must determine FLSA status for employees. All employees are classified with an FLSA status: FLSA non-exempt or FLSA exempt. An employee’s FLSA status determines their eligibility for FLSA coverage, namely overtime pay and minimum wage.

How do you define FLSA status classifications?

How do you determine if an employee has FLSA non-exempt or exempt status?

To determine an employee’s FLSA status, you must answer the following questions:

With a few exceptions, employees must meet all three of the tests above to have FLSA exempt status (exempt from FLSA coverage). If an employee does not pass these tests, their classification is likely FLSA non-exempt. This means the employee is eligible for FLSA coverage.

Oftentimes, wage claims occur when an employee has been misclassified. To reduce the risk of claims, penalties, and lawsuits, be sure to define your workers and classify your employees correctly. And be ready when the overtime rules change on December 1, 2016. Get this guide to help you manage FLSA compliance in your organization.