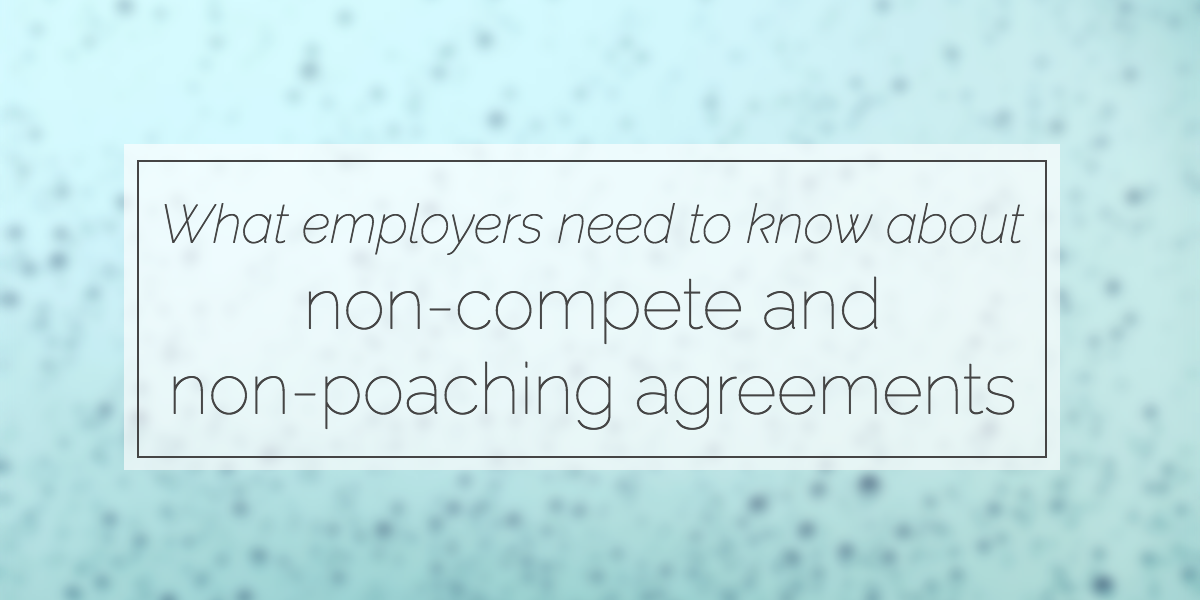 When your best employees leave, they don’t just take their skills and training with them; they also take the knowledge and contacts they’ve gained on the job. This can pose a threat to your business goals, especially if their new role involves competing or negotiating with your company.

For employers of highly-skilled talent, the urge to keep trade secrets from walking out the door— and into competitors’ offices— is understandable. That’s why some companies choose to institute non-compete clauses (NCCs) as a condition of employment.

Non-compete clauses or agreements typically dictate that employees cannot go to work for a competitor or start a business in the same industry within a certain time frame after ending their employment at a given company. In theory, they’re a great idea for employers, but are they enforceable?

Non-compete agreements are enforced differently (or not at all) depending on a number of factors, including state law, how restrictive the terms are, and which companies are deemed competitive. If your company currently uses (or is considering implementing) an NCC when hiring employees, here are some questions to ask:

Are the limitations reasonable?

Generally, in order for a non-compete clause to stand up to a legal challenge, it should include clear, reasonable terms, such as:

What’s in it for the employee?

When future or current employees sign a non-compete agreement, they should always be offered compensation for agreeing to the terms. That’s because, in complying with this kind of clause, the employee is effectively limiting their ability to earn a living in their field of expertise.

If an NCC is a condition you’ve raised prior to employment, the job itself would qualify as reasonable compensation. However, if you’re retroactively asking existing employees to sign a non-compete agreement, it’s a little trickier. Some companies say that continued employment is enough of a compensation, but it’s unclear whether that logic would hold up under legal scrutiny. To be safe, it’s probably wise to offer employees a raise or a bonus in exchange for signing a non-compete agreement.

Does this comply with local, state, and federal regulations?

In early 2018, The Workforce Mobility Act of 2018 was put before the U.S. Senate. If and when it passes, it would result in a federal law prohibiting the practice of non-compete clauses. However, it would still allow employers and employees to come to an agreement that employees may not share trade secrets with their new employers. The bill has currently not passed, but it may be a sign of where federal law is heading on this issue.

At the state level, there is wide variance depending on which state(s) your company operates in. Some states, such as California, North Carolina, and Oklahoma disregard non-compete agreements altogether. Other states have imposed various limitations on employers who wish to enforce NCCs, such as only allowing certain highly-competitive roles to qualify, or requiring employers to pay employees for each week they’re prohibited from going to work for a competitor.

If your company leadership strongly feels the need to implement a non-compete agreement to protect valuable information, be sure to verify that your state law would permit or enforce it.

What about non-poaching agreements?

One form of NCCs is a non-poaching agreement, which is intended to stop one company from “poaching” talent from a competitor. This may be an agreement between two companies not to solicit from each other’s workforces or hire one another’s former employees for a set time period after termination or resignation. It may also be included in a broader NCC as a way to prevent former employees from taking advantage of recruiting bonuses at their new companies by helping former coworkers move jobs.

As recently as a few years ago, these agreements were prevalent in the tech sector, but, per the Department of Justice, they’re in violation of antitrust laws. According to the DOJ’s 2016 Antitrust Guidance for Human Resources Professionals:

“An HR professional should avoid entering into agreements regarding terms of employment with firms that compete to hire employees. It does not matter whether the agreement is informal or formal, written or unwritten, spoken or unspoken.

An individual likely is breaking the antitrust laws if he or she:

So what’s the verdict?

Ultimately, while non-compete agreements might make employers feel more comfortable, they impact employees’ ability to earn a living, which would factor into any legal evaluation of one of these agreements. Unless your company has a valid and provable reason for implementing an NCC, and your state would allow for the enforcement of it, you’re probably better off steering clear of them altogether.