Special cases and the ADA: what employers should know 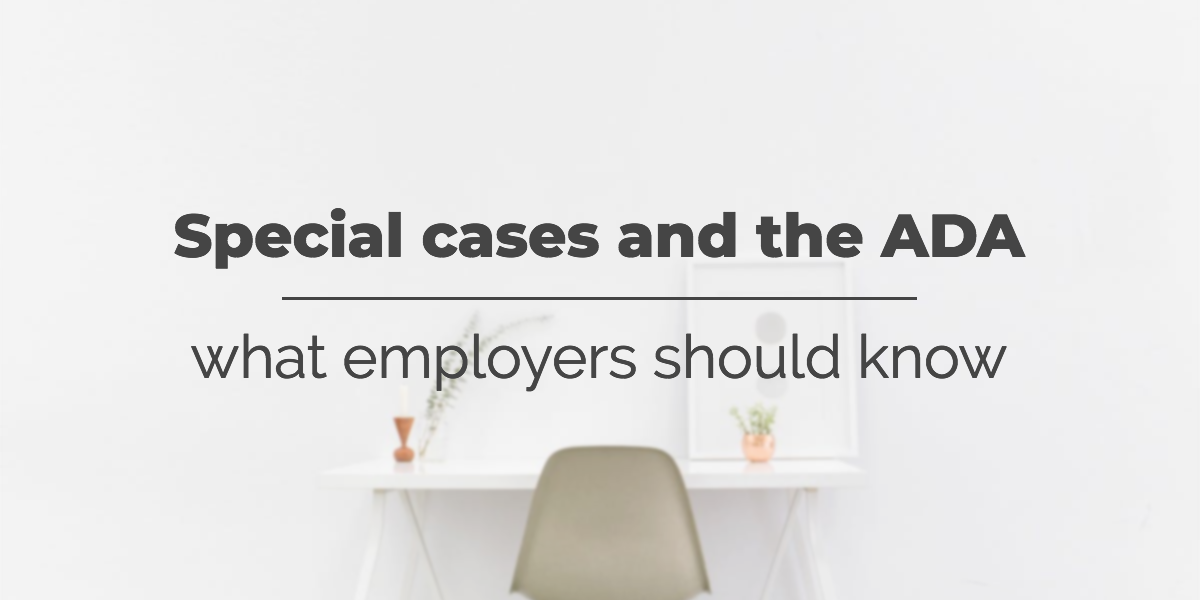 For most HR managers and company leaders, staying in compliance with employment law is a high priority. Not only is compliance important in terms of avoiding liability and penalties, it helps the company do the right thing for its employees and create a more fair and equitable workplace.

One such law is the Americans with Disabilities Act (ADA), which was signed into law in 1990. The ADA is intended to prohibit employers, schools, and public places from discriminating against anyone on the basis of disability, and requires them to provide reasonable accommodations.

The spirit and intention of the law is clear, but in practice—as with many of the laws that govern workplaces— there’s lots of room for confusion and differing interpretations. In a previous article, we addressed some common myths about the Americans with Disabilities Act, but there are some special circumstances that many employers may not know how to handle.

For instance, are employers within their rights to ask potential employees to undergo a physical exam before hiring them? And what are the obligations for accommodations for pregnancy? Let’s take a look at these questions and find out what constitutes full compliance:

If the job you’re filling involves physical exertion or the ability to perform certain physical tasks, it makes sense that you’d want to ensure that you hire someone who’s up to the task. After all, your company invests a lot of time, money, and effort into developing a strong workforce. But is screening for physical capabilities on the wrong side of the ADA?

The key is to make sure you’re asking for these exams to be performed at the right point in the hiring process, and that you’re consistent about who is required to undergo them. Here are some things to keep in mind:

Ensure that any medical practitioner performing the examination has a clear understanding of what’s required as part of the job, and that they know they should only divulge information about relevant physical attributes or conditions that might affect the candidate’s ability to perform the job.

When she told her supervisors about her medical restrictions, UPS informed her that because they required all drivers to be able to lift parcels up to 70 pounds, she would not be able to continue to work for the duration of her pregnancy. Instead, she was put on unpaid medical leave and lost access to her medical coverage.

When Young sued the company on the basis of sex- and disability-related discrimination, the case made its way to the Supreme Court, which ruled in favor of Young’s claim in 2015. In a 6-3 majority decision, the Court cited the fact that the company had a history of providing similar accommodations for non-pregnant employees who were rendered temporarily unable to perform their job duties.

As part of their argument, UPS claimed that pregnancy did not qualify as a disability covered by the ADA. Strictly speaking, this is true; pregnancy is not considered a disability under the law. However, according to the U.S. Equal Employment Opportunity Commission (EEOC):

“Although pregnancy itself is not a disability, pregnant workers may have impairments related to their pregnancies that qualify as disabilities under the ADA… An employer may not discriminate against an individual whose pregnancy-related impairment is a disability under the ADA and must provide an individual with a reasonable accommodation if needed because of a pregnancy-related disability, unless the accommodation would result in significant difficulty or expense ("undue hardship").

In light of the Young v. UPS decision and the EEOC guidelines above, what is an employers’ obligation when it comes to accommodating employees with pregnancy-related impairments? Reasonable accommodations that may be necessary for these temporary disabilities could include:

These accommodations may require some creative thinking, but retaining pregnant workers’ talent and demonstrating a commitment to their wellbeing on the job aren’t just nice gestures; they could protect your company from unwanted liability.

Stay in the know about compliance issues

Among all the other responsibilities of your job, staying aware of the nuances and changing interpretations of employment law can feel burdensome. When you subscribe to the Fuse Workforce Blog, you’ll get a weekly email with actionable information to help you ace your job, including HR best practices, compliance updates, and more. Just enter your email address below to get started!