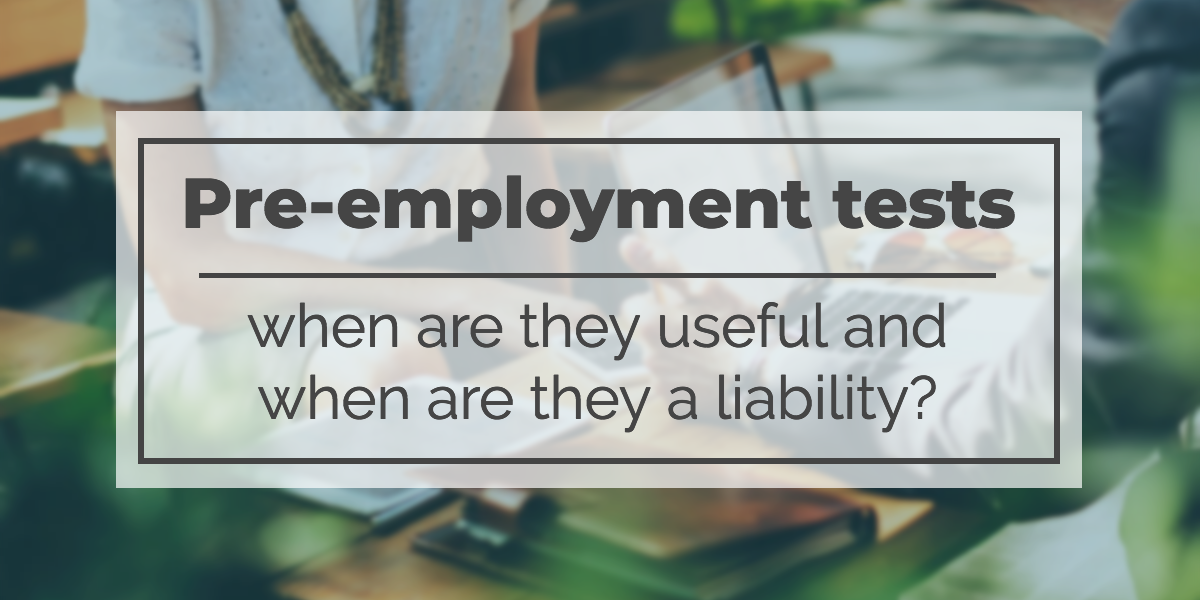 The hiring process is crucial to the success of your workforce, especially when you’re filling an essential role. After an extensive search and hours of interviews, nothing could be more discouraging or frustrating than finding that the person you hired is a poor fit. Whether your new employee oversold their abilities, their personality is a poor fit for the culture, or they need more training than you expected, hiring the wrong person raises a whole new set of challenges— including the prospect of starting the hiring process all over again. The frustration is only magnified by the current tight hiring market.

Because of the high stakes involved in finding the right fit for a job, it’s become more common for companies to use pre-employment tests to help them determine whether a candidate’s skills and temperament match up with what’s needed for the role. But this practice raises questions about legality and discrimination, so it’s important for hiring managers and company leaders to know what kinds of tests they should and should not use to screen job candidates.

Here are some of the most common types of pre-employment tests and when to use them (or not use them):

Depending on the nature of the position you’re looking to fill, a personality test may or may not be necessary. For positions that are public-facing or client-facing, however, it may be a good idea to ensure that the person you hire has the right temperament to represent your company. Read more about using personality tests in the workplace here.

A subset of this kind of test is emotional intelligence testing, which screens candidates for their understanding of emotions (their own and those of others), their emotional resilience, how well they work with others, and their ability to handle professional setbacks. This can be useful for screening candidates in professions that involve building relationships and working closely with colleagues and/or clients.

Cognitive tests used to be referred to generally as “intelligence tests,” but as our collective understanding of true intelligence broadens, that term no longer applies to this kind of test. Cognitive testing is generally used to measure reasoning, memory, math and/or reading comprehension skills, speed and/or accuracy, and any other skills related to cognitive performance necessary for the job. This kind of test may be a good fit for a role that requires accuracy or speed in mental processes.

This kind of test can be particularly useful for helping hiring managers see a candidate’s skills in action, and can help them anticipate the quality of work to expect from that person. A sample job task test can include short work samples and simulations that demonstrate a candidate’s skill level. However, it’s important that this is a true simulation; it’s generally not acceptable to assign actual work that needs to be done for your company to someone who has not yet been offered a job.

In a time when federal and state law sometimes clash on the legality of using certain drugs, navigating the use of drug testing in the workplace can be tricky. In states with legal recreational marijuana use, it’s generally up to employers to decide whether they want or need to test applicants for drug use. However, for any role that involves heavy machinery or poses other safety-related concerns, it may still be a good idea to use drug testing as part of the hiring process.

For any job that involves manual labor and requires certain physical abilities, employers may decide to use physical ability tests to ensure candidates are up to the task. In these instances, however, it’s important to comply with the Americans with Disabilities Act, which prohibits employers from requiring a medical exam prior to extending a job offer.

In the pre-screening process, employers may ask job applicants to describe or demonstrate how they would perform job functions, but cannot ask prospective employees to undergo a medical exam until after a conditional job offer is made. It’s also important to note that in order to be ADA compliant, all requirements for physical exams must be applied evenly across all applicants for the same role.

What kinds of tests not to use

Although it’s unlikely that your company would consider using them these days, remember that— with few exceptions— employers are prohibited from using lie detector tests in the hiring process according to the Employee Polygraph Protection Act of 1988. You should also ensure that none of the screening practices your company uses could be construed as taking race, color, gender, religion, national origin, disability, or age into consideration when making a hiring decision.

Your company’s employees vital to the success of the organization, so it’s wise to make sure that you’re investing your time, energy, and money in the right people for the job. When they’re chosen wisely and implemented correctly, pre-employment tests can go a long way toward helping hiring managers pick the best fit for the role and may prevent headache further down the road.