Is your workforce prepared for modern drug policies? 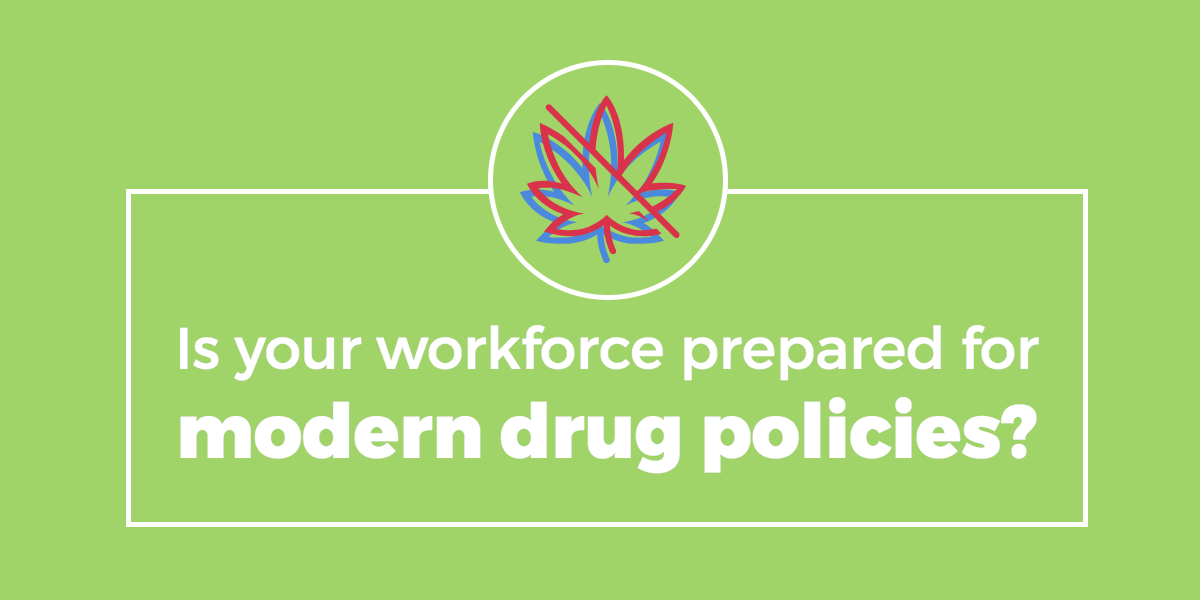 What happens when state law and federal law disagree? Today in the U.S., over 20 states have laws allowing marijuana for medical use, and nine states and Washington D.C. for recreational use—but these are only state laws. According to federal law, marijuana is a Schedule I controlled substance (considered to have no medical benefits and a high potential for abuse), meaning any possession of marijuana is illegal in the United States.

In 2013, the Obama administration issued the so-called Cole memo which essentially relaxed federal law enforcement around marijuana issues to free up enforcement efforts to fight more pressing drug problems like sales to minors, drug trafficking, and drug cartels, while leaving law enforcement around possession up to the states. In early 2018, however, the Trump administration overturned the memo calling their move, “a return to the rule of the law.”

Despite backward steps from the federal government, nearly ten more states have ballot initiatives that could change their laws on marijuana. With the upcoming elections this year, we could see a big change in the rules around weed at the state level.

What does this mean for employers?

Anytime laws differ at the state and federal levels, things can get sticky, especially for HR professionals trying to stay compliant with workplace regulations. Workplace laws around marijuana use can get especially tricky when prescribed for medicinal purposes. It would be simple for employers to make standard rules against marijuana use in the workplace (or coming to work high) just like employers prohibit the consumption of alcohol or showing up to work intoxicated. But when an employee is registered as a medical marijuana user, it’s not as cut-and-dry as a blanket rule. This raises some questions for HR professionals.

Court cases have already come into session over employees being fired for marijuana use and failed drug tests—but if you live in a state where use is legal, can you fire an employee on this basis? What workplace rules or tests can you have in place? How do you accommodate registered medical marijuana users?

Despite changing state laws on cannabis, many employers are still legally mandated to conduct drug screenings (including cannabinoids), especially those in manufacturing industries or other fields where safety is a factor in daily responsibilities. A Bloomberg Law survey reported that whether they’re mandated or not, seven out of 10 employers perform drug screenings. While the majority screen all employees, around 30% of companies screen only those employees in safety-sensitive positions. According to the report, most employers administer drug screenings when an employment offer is extended, after an incident in the workplace, or if an employer has evidence or a reasonable suspicion.

While some 63% of companies surveyed believe drug screening to be an effective use of time, 25% of respondents think their organization’s drug policy should be updated. Respondents also noted how changing laws could affect their ability to attract and retain talent with their current policies.

Five years ago, if a medically-registered user challenged their employer’s decision to fire them because of a failed drug screening, the court typically ruled in favor of the employer’s argument that marijuana use is still illegal under federal law. In more recent years, that trend has shifted to favor state laws. In cases in Massachusetts, Rhode Island, and Connecticut, the courts ruled in favor of the employees or job candidates. In some cases, the courts viewed the termination as violating the disability rights of the employee, while others ruled that the federal Controlled Substances Act doesn't regulate employment and therefore it is not illegal to employ a marijuana user.

As an HR professional, you need to know how to keep your workplace up to modern standards—from regulatory compliance to workforce trends. And that includes drug policies.

What should HR do to prepare their workplaces for modern drug policies?

Know the laws in your state (and county)

Not only do marijuana laws differ from state to state, they can differ at the local level too. Some counties may have stricter laws than their own state, so be sure you know the law of the land wherever you have an office location. The laws can be complicated: they dictate how much weed you can have in your possession, what form it can be in, where you can smoke it, how much you can grow, if it must be gifted or can be sold//purchased, what doctors can prescribe or recommend, and so on. You may not be overly concerned with the specifics of an employee's recreational choices outside of the office, but it’s worth knowing the rules on your responsibility as HR. Depending on your state laws, the issue could be more than an employee’s failed drug test—it could be an employer discriminating against an employee’s disability.

We’ve talked a lot about changing workplace norms on this blog, from women in leadership and remote collaboration to supporting lateral career moves. So much has changed in recent decades, we have no reason to go with things because it’s “the way we’ve always done it.” The modern workplace is data-driven and motivated by serving its customers and employees.

It’s worth taking a step back to understand your reason for testing and policies. Federal mandates and safety-sensitive positions require drug screening for good reason: safety. That should always be a top concern for your organization. Beyond that, examine your policies and see how they help or hurt employees who may be medically-registered users, and make any needed adjustments to accommodate employee disabilities.

Talk to your employees

It’s imperative you communicate policies and expectations to employees and job candidates. Let potential hires know whether to expect a drug screening as a condition for hire and if screenings are to be expected at all during time of employment. If you make any changes or updates to current drug policies, be sure they are communicated clearly to your employees. All employees should have easy access to drug policies and screening procedures in an employee handbook, wiki, or self-service portal. In the same way you work to understand your reason for screening or other policies, don’t forget to let your employees know too. Transparency can go a long way toward building trust with employees and helping retain your best talent.

Work to accommodate when possible

Regardless of medical registration or other off-duty marijuana conduct laws, employers can still enforce a drug-free workplace that prohibits employees from getting high on the job. However, under certain disability laws, employers cannot fire a medically-registered employee for failing a drug test and should work with employees to accommodate their medical needs.

If you have an employee who is registered for medical marijuana use, you could face strong repercussions for firing or other disciplinary actions or rules. Be cautious, and always seek legal counsel before taking any action, as the waters can get murky. The best approach would be to allow registered users more flexibility in their schedule or sick leave in order to accommodate their medical needs so they can manage their health without impairing their performance on the job.

As an HR professional, you’re making every effort to ensure your workplace is safe and your employees know their rights as workers in the U.S. and in your state. You can both protect your company and help your employees by understanding state laws and your own office policies. Help deliver the best experience for your employees so they can do their best work for your organization.

When it comes to labor regulations and workforce trends, there’s a lot to keep up with. Stay in the know by subscribing to our HR and payroll blog.